Home > Think Tank > The Categories of Apps in Windows 10

The Categories of Apps in Windows 10 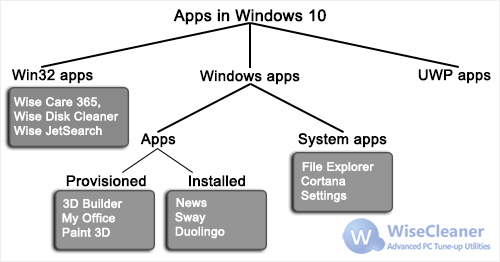 It was introduced in Windows 8, primarily installed from the Store app.

The full name is Universal Windows Platform applications, designed to work across platforms, and can be installed on multiple platforms including Windows client, Windows Phone, and Xbox. All UWP apps are also Windows apps, but not all Windows apps are UWP apps.

Subdividing Windows apps can be divided into 2 categories:

Apps that are installed in the C:\Windows* directory. These apps are integral to the OS. E.g., File Explorer, Microsoft Edge Legacy, Cortana, and so on.

All other apps, installed in C:\Program Files\WindowsApps. There are two classes of non-system apps.